When I set out to write this story, I had no idea how relevant it would be by the time it was published. By now the world is aware that there's no such thing as a real secret, and at its core, that's what this whole series will speak to. 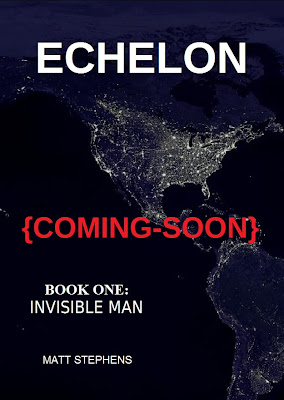 When I started this, I had something entirely different in mind, and it quickly became clear that the story was going to go places I hadn't originally thought of, so it naturally formed into a series of short stories more than a novel.

I've always liked stories about regular people in extraordinary circumstances, but this one takes it a step further, because the central character in this tale is presented with something that most people would find very appealing: An ability to know anything about anyone. The world at large has gotten used to the idea that our lives are lived under a state of constant invisible scrutiny, and for the most part, people are willing to make that trade to be part of the convenience and instant gratification of the Information Age.

But what if there are people out there that use their own version of this Second Sight to fight the good fight?

Echelon is a series that will make you think about what you would do under the same circumstances. Here now is a clip from the upcoming first book, which serves as something of a pilot episode for the new series.

Herbert flipped the case open, and took out the glasses. They looked like any other over-the-counter pair of reading glasses, though when he looked at them head on, they weren't bifocals.

They were heavier in his hand than most glasses he'd ever seen, though he couldn't tell how. He put them on, just to see, and they fit him perfectly. The lenses were fake, he knew that instantly.

And then suddenly, before his vision, was a... He couldn't begin to guess. Floating in midair, blinking in and out of existence, was writing, as if typing itself out across thin air.

Tilting the glasses down, he looked over the top of them, and there was nothing there. He slid the glasses back up, and turned his head. The writing moved with his eyes.

He blinked and the image changed, this time becoming a strange vein-like pattern that he couldn't recognize. Writing formed like a caption beneath it. (Retinal Scan... Confirmed. Begin start-up.)

("Hello Herbert. I hope you like the book I sent you.")

The hairs on his arms and neck almost jumped to attention. "Hello?" He said automatically.

There was no response, and he couldn't help but feel a little silly; talking to thin air.

Herbert glanced around, as though expecting cameras to be watching him in secret. (Start-Up Complete. Interface Activated. Welcome to Echelon.)

In the first installment of the new, exciting Echelon Series, Herbert Brandis is thrown headfirst into a life that he never knew was possible.

The world is more connected than any of us realize, and growing more so every day. Something unexpected and unstoppable has emerged; throwing open every locked door, revealing every shady secret. Herbert Brandis never wanted more than his safe, ordinary life; when a strange package is sent to him anonymously. Within a day, he is catapulted into a conspiracy that reaches through Organized Crime, mysterious groups of operatives, and uknown powers that can exert enormous power over the world around him.

Information is Power, and the tools of ultimate power now rest in the hands of a small group of people, called together for a common purpose, against a powerful enemy that will stop at nothing to achieve his aims.


Coming Soon to the Amazon Kindle Store:
Echelon: Book One: Invisible Man.
Posted by stephensmat at 05:06