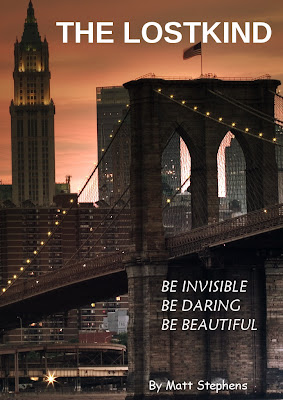 "Who are you people?" Vincent asked wistfully of the darkness. The adventure was ending, and far too soon.

"We Are The Lostkind." Archivist said simply, the deep powerful voice gliding off the walls and surrounding him, rich enough to shake his cells apart.

"We are the cast-off, the unworthy, the invisible." Yasi whispered to Vincent, as her fingertips led him through the dark. Their footsteps made no sound, though he could hear his own stumbling feet easily. It was so dark that Vincent wondered if he still existed; if the magic of the underworld had shattered him into the ether.

"We are the ones that you have trained yourselves not to see." Archivist's voice took on a spooky, ethereal quality. "The child that walks alone with purpose, so you assume he is not lost. The filthy beggar that offends your senses, so you turn your eyes away. We are all around you, Vincent. The story of a city is told in the memory of all those that walk through its places. Look around sometime, and you can see the fingerprints of a thousand lives in the walls. We are the living memory of this city, and we have been for a hundred years. Don't be afraid, Vincent. We'll get you home safe."

Far beneath the Subway, far beneath the sewers, hides a Secret City filled with wondrous people that fell between the cracks of our world. They make their way through the world; content to be invisible to the eyes of New York. But their home has suddenly been put in danger.

Vincent McCall was an ordinary guy who worked in a typical office job in New York City. But then one night, a seemingly chance meeting with an exotic stranger  on the Subway drops him, almost literally, down the rabbit hole. He is now part of a secret and beautiful world beneath the world; where the only magic needed is what the inhabitants create through wonder and beauty.

His whole outlook on life is changed by his new awareness of The Secret City; and the invisible Lostkind that live there... But all too soon he becomes aware of more than just the beauty and wonder of the place; and unwittingly becomes the central figure in a dangerous race to save them all from a deadly and savage foe.

If You're Still Not Sure: You Can Read It Here First, Free Of Charge

Now Available: The Lostkind by Matt Stephens; an adventure that will change your view of the world around you; and leave you to wonder what else might be happening that you don't notice.