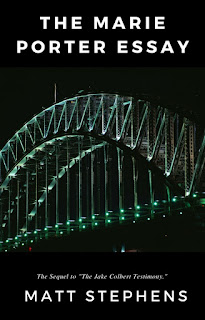 
It has been five years since the small country town of Curtis Creek was invaded. The survivors have rebuilt their town, and done their best to move on; trying to forget that Aliens exist. Not all of them have succeeded in letting go, but small towns know how to keep a secret.

Marie Porter thought she had put her past behind her, but she's still haunted by the losses... and by all the questions that went unanswered.

But then a mysterious tip-off brings her home, and sends her on a dangerous mission across the globe, with her best friend Jake Colbert. Before she's done, she'll make new friends, face old enemies and ultimately risk both herself and the entire world; just for a chance to find out the truth.

The thrilling sequel to "The Jake Colbert Testimony" and the second book in the Curtis Creek Series, "The Marie Porter Essay" will keep you guessing right up to the last page.

I hadn't really intended to write a Sequel. As I said before; The Jake Colbert Testimony was my way of playing out a lot of the tropes found in YA Sci-Fi, but to write them with an ending that would be far more realistic, compared to a lot of the YA Fiction that i grew up with (And still love, to this day).

But then something happened that I didn't expect: I got feedback. Not from Amazon, but from people I know in real life. People that I know through my family, friends-of-friends; they come up to me and ask about the sci-fi novel I'd written.

Two of them, both easily old enough to be grandmothers, come over, very excited to learn that someone they knew had written a sci-fi. It amazed me. These two women, though I love them both, usually came to me for technical support. I had to talk them through how to work their iPads to buy the story on their kindle apps; but they were both rapt; each demanding paperbacks. After knowing them for almost eight years, I was stunned to learn that between the two of them, there was a collection of 50's black and white 'classic' sci-fi and that 'Blade Runner' was one of their favorite flicks.

I was surprised, but I shouldn't be. It's not like Geekdom wears a badge; and I've always believed there was a lot more of us out there than most thought. My father was the one that introduced me to Sci-Fi; and it shouldn't come as a shock that his generation has fans. It's just that we don't usually talk about it. Seriously, how many people volunteer a debate about Star Wars vs Babylon 5 with friends of your parents?

So after being asked for a sequel enough times, I sat down and wrote one. Here's to all the fans out there. May you always have people to talk to about your fandoms!
Home
Subscribe to: Posts (Atom)