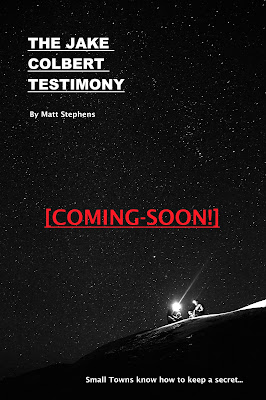 There was a long silence as they all listened. The omnipresent sounds of nature were missing. It was an unnatural eerie quiet, all they could hear were their own heartbeats, their own breathing...

The corn exploded outward and everyone jumped back as Jake came half running back into the headlights of the Jeep. And with him was the source of the noise Marie had heard.

It was a child.

The whole group gathered around tightly. The boy wandered like a zombie, led by the hand over to the bonfire. The boy was shaking, his hair was dark and cropped very short, almost a crew cut. His eyes were big and wide, and everyone realized he wasn't wearing shoes. Marie checked his vitals quickly.

"Heartbeat's okay. But he's ice cold." Marie whispered. "Kid, can you tell me your name?"

"His eyes aren't even moving." Marie whispered and tried again. "Can you understand me?"

"Marie..." Jake whispered, as though afraid the boy would hear him. "His feet."

The boy wasn't wearing shoes, his socks were shredded... and from the looks of things, so were the soles of his feet. Jake and Marie traded a quick look, and Jake swept the boy up, carrying him back to the cars, while the others followed, huddling together in the headlights.

"My God." Zack blurted as they approached. "Who is it?"

"Anyone recognize him?" Jake demanded.

Jess brushed the boy's hair gently. "That... That's impossible." She blurted. "It's... Jake, this is Douglas Gunn!"

"Doug?" Pierce blurted. "Impossible!" He leaned in closer. "Well, if it's not Doug, his twin brother is on one of the Missing Persons Posters at my dad's office."

Marie looked askance at her boyfriend. "What? Why? Why not?"

Jake handed Zack the flashlight. "That flashlight of yours is a piece of junk, by the way."

Zack checked the flashlight over. "I put new batteries in a couple of days ago..." It suddenly came on in his hands, shining brightly.

"You had it switched off?" Pierce found that hilarious.

Zack shook his head firmly. "The flashlight is working. I never hit the switch."

The boy's eyes moved, aware of his surroundings for the first time. Instantly, he focused on the bright white headlights shining over them. His eyes went completely feral, terrified to the point of unhinged as the bright lights flashed over him. "YA-AAAAAAAH!" He shrieked hysterically, and everyone jumped back in shock at the sudden mania. "Liguo! Natabas Nalech Che!" He screamed psychotically...

...and promptly passed out. The boy dropped like his strings had been cut, and he lay collapsed on the ground.

Everyone was breathing hard in the sudden silence that followed. It had been a harsh, chilling moment, made all the more horrifying by the fact that it was a little boy that had gone berserk.

Pierce moved first, scooping the kid up and carrying him to Jake's car. "Party's over. Let's get the kid home." He said plainly, and everyone snapped into action, grabbing their stuff. Jess helped guide the boy inside the car gently, then headed for the Jeep with Pierce.

"Go." Pierce told Jake. "Jess and I will take Zack in the Jeep. Take Marie with you, she's a Nurse. We'll take care of the fire."

Marie put her hand up, like she was in class. "I'm not really a-"

Pierce nodded, and the group split up quickly. Jake took the Driver's seat, Marie slid into the back seat next to Doug, cradling the boy's head carefully. "Jake, why can't it be this kid Doug Gunn?" Marie called from the back. "Everyone says it looks like him, Pierce said his father has a Missing Poster... why can't it be him?"

Jake called over his shoulder to her. "Dougie was a kid in our class, back before you moved here. He wasn't really a friend of ours, but we knew him... He went missing when we were all in Kindergarten... We were all six years old. He should be seventeen by now."

Marie looked down at the boy trembling in her lap. "Then who the heck is this?"

Coming Soon the the Amazon Kindle Store: The Jake Colbert Testimony
Posted by stephensmat at 23:06