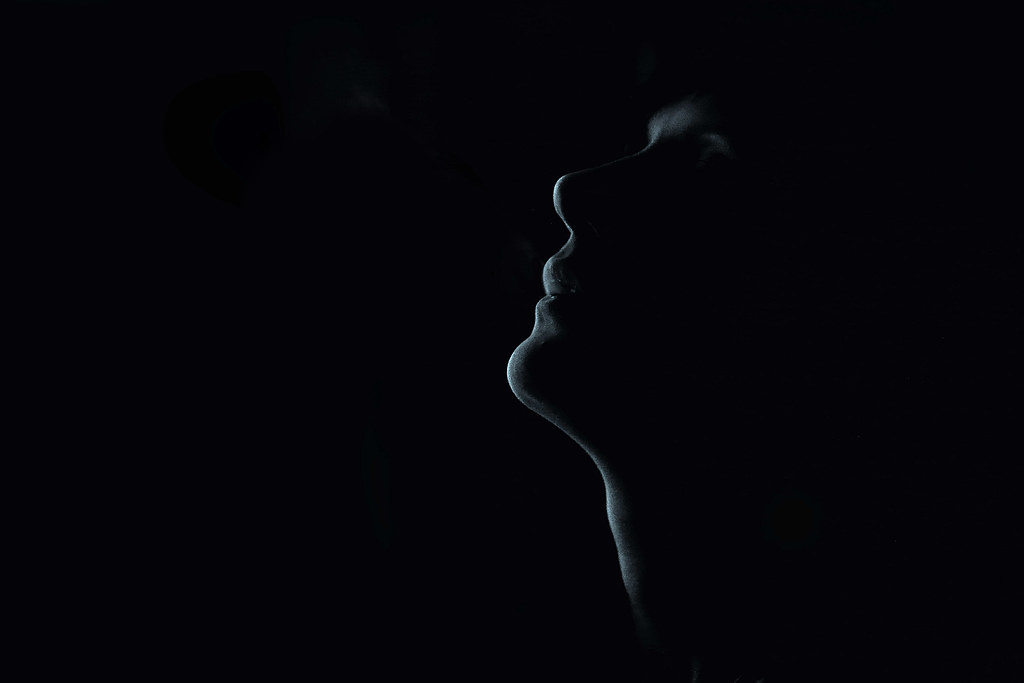 She knew he was watching her. She stayed perfectly still, framed in the window. The moonlight came in, washing over her face, and casting her in perfect shadow. The noise from outside was distant and all too clear; but she put it out of her mind. She focused all her energy on keeping still for him, and on listening to his pencils as they scratched across the paper.

The wind whistled again. She ignored it, focusing on the sounds she wanted to hear. There was so much to ignore tonight. That was the whole point.

She smiled a little. "I'm okay. How does your sketch look?"

"I thought I was being so subtle." He chucked warmly. His soft laughter echoed around the whole empty room, echoing off the hardwood floors. He held up the sketchbook to her, and she looked at the black and white sketch of her face. In the dark, he could only sketch the shape of her against the moonlight. The hollow of her throat, the curve of her lips...

Neither of them flinched. They had both heard too many explosions to be shaken by them now.

He extended one arm from the blanket, over to the table lamp and flipped the switch on and off. There was no power, which surprised neither of them, and he drew his arm back into the safe warmth.

She reached out a hand and stoked the small fire in the saucepan. "Wonder if the lamp will burn?"

"Not in the good way." He chuckled again. "How does it look outside?"

She elbowed him lightly. "We aren't talking about that, remember?"

He nodded. "Not tonight." He unplugged the lamp, and held it out to her. "You want it?"

With a cheeky grin, she took the lamp and carried it over to the window. She opened it swiftly and tossed the lamp out. A chorus of cries echoed up from the street, silencing quickly. The wind whistled in quickly and she slammed the window shut.

She turned back to him as he stoked the little fire. His eyes glowed a little, and she was glad for it. They said the last thing to fade was the eyes, and as long as his were bright, her world was perfect.

Even so, she came away from the window-seat and came over to the rug, settling on the floor beside him. He wrapped the blanket around them both, curling into each other tightly. His left hand was around her shoulders, right hand still working on the sketch.

Even over the chaos outside, they could hear the distant sound of music. Someone in one of the apartments was playing the saxophone. It was soft, and soulful and full of terrible beauty. It just barely reached them over the soft crackle of their fire.

He leaned into her a little tighter, putting a soft kiss against the top of her head. "I never should have let you get rid of the piano."

Soft fingers brushed against his lips, but he couldn't see them in the dark. "Hush. It was too dangerous to keep it." She looked around the room. A few pillows, propping them up on the hardwood floor, a small campfire made in a large saucepan; with a flame as small as a candle. A stack of books, her gunnysack, and the two of them, wrapped in the blanket. "We made a good try of it. Held out for seven years."

"We did." He agreed, and kissed her again. "But we aren't talking about that, remember?"

"Not tonight." She repeated their mantra. The saxophone was still playing, growing progressively more and more... heartbroken; until the sound of a gunshot rang out, and the music stopped instantly. "Wonder why he held onto it this long?"

"Probably he same reason we kept the books." He murmured and finished scribbling on the page. "What do you think?"

She looked at the sketch of her face. "She's beautiful. Do I really look like that?"

"You always have to me." He tore the page out and handed it to her. She folded it up and gently fed the small fire. It was an old ritual. She always thought her face was too narrow to be pretty, but she was beautiful to him. She felt a little more beautiful every time she saw herself through his eyes. "What do you call this one?"

"Selene." He said after a moment. "It means, Daughter of the Moon."

She smiled and kissed his fingers. "I miss the moon. Sweet Diana in the sky. Lucy with her Diamonds."

She licked her lips. "Flecker, I think you said. That was his name, right?"

He nodded and picked up the book. Half the pages were long since torn out, and she tore out the next one, holding it up to him as he read it softly.

"Or when the wind beneath the moon is dazzling like a soul aswoon, And harping planets talk love's tune with milky wings outspread, Yasmin, Shine down thy love, O burning bright! for one night or the other night Will come the Gardener in white, and gather'd flowers are dead, Yasmin!"

"That's beautiful." She whispered, and folded up the page. She pressed her full lips against the folded page for just a moment, giving it the blessing of a last survivor's kiss as she pressed it gently into their flame. "I wish I knew how to read."

"I would have taught you." He promised.

"I know, but I wouldn't have remembered." She whispered warmly, and held his icy fingers between her own. "I like to pretend sometimes. I pretend that these pages always burn a little warmer. I like to imagine that the pages are full of love, because that's what the poet had when he wrote them. I think that love always burns a little brighter."

He smiled again. "You may not read, my love; but you sure can write."

"I'm serious." She said lightly. "You remember how we met?"

He shook his head. "Only sometimes. Only a little. But I remember the memory is so... warm."

She nodded, satisfied. "There you go."

He looked over at her with a look. "Why? What haven't you told me about that moment?"

She ducked her head, a little embarrassed. "I spilled my coffee on you. That's where the warmth came from."

He threw back his head and laughed. She delighted in it. He never lost laughter. He didn't know what decade it was, but he still knew laughter.

"Can I make a confession?"

She ducked her head again. "I can't remember our names." She confessed.

He nodded. "Me neither."

BOOM! Another explosion in the distance. They were getting closer.

They sat silently a moment. She leaned back a little more. "I love you."

"Love you." He returned. Neither of them remembered what this 'coffee' they spoke of was, but they both knew that. He traced her lips with one finger, barely able to make them out against the darkness. The flames did nothing to provide light, only a little warmth. "I remember your mouth. Your smile is always a little more on one side than the other."

She pressed a hand over his chest. "I remember your heartbeat. I know it, more than your voice." She shivered. "I don't want to lose that."

He shifted under the blanket, pulling her closer to his chest, so that she could listen to his heartbeat. "Did we have more things?" He asked. "When we say all the things we remember, did we have more than that?"

"I don't know." More gunshots outside. They were getting further away. "We should go." He sighed. "I don't think we can put it off any longer."

She looked over to the last of their things. "We can put it off for another five books. Six, if you don't want to take one with you."

BOOM! Another explosion in the distance. He reached out from their blanket and unrolled the gunnysack. It was empty. She snorted, as though that was to be expected, and started ripping the canvas up methodically, tearing the canvas into small pieces, feeding them into the flame.

"Can I ask you something?" She asked. "Are you scared?"

He smiled a little, as though amused by the question. "Not any more."

"Where were we up to?" He asked, reaching for the book again.

She reached out and covered his fingers with her own. They were both turning blue from the frigid air. "Before we go..." She whispered. "I just wanted you to know, that I'm glad we stayed. In a lot of ways, I wouldn't trade the last three years for anything."

"Me neither." He agreed.

The glass cracked. Maybe something hit it, maybe it was just done trying to hold together, but the open air was suddenly part of their little world. It was frigid and smelled of sulfur and burnt cinnamon. The already biting cold turned brutal.

They two of them barely noticed; pulling themselves closer together against the dark. The wind settled after a while. The fire had gone out instantly, the tiny flames washed away in the wind.

"I could try and get it going again." She offered.

They wrapped as much cloth and clothing around each other as they could. They moved slowly, saving energy. When they went to the door, he turned the handle and pulled it open. The door fell off its hinges, and part of the door-frame came with it. Neither of them commented. Neither of them were surprised.

"I wish we could have made it till dawn." He said. "I wanted to give you one last night before we had to try for it."

She shushed him. "We had crackers. We had fire. They didn't find us." She kissed his fingers. "It was a perfect day. I'm glad I got to spend it with you." Her lips brushed his fingers, and graced a gold band, wrapped around his third finger. "You never did tell me." She said quietly. "What you think this thing means. I've got one too." She held up her left hand, showing the identical ring on her hand.

"I don't know." He admitted. He had wrapped the strap from the gunnysack around the jagged plank of wood from the door-frame, and slung it over his shoulder.

BOOM! Another blast, this one much closer. They didn't flinch.

"What do you think we'll find?" He asked her.

"I don't know." She admitted. "There's lots of things we don't know. I remember that bothered me once. It doesn't any more."

They held hands and made one last look around the room. There wasn't much left in it to look at.


"It was a perfect day, wasn't it?" He decided finally, as they headed out into the dark.
End

AN: As an experiment, I decided to try writing  a short story, and do it completely without planning. I would just sit at the keys and start writing words. Within half an hour, I had this. I have no idea what the story is about, or where it would lead, or where it would start. The point of the story was that the act of typing it would lead somewhere. This is where it went. I hope you enjoyed it. If you did, feel free to review.