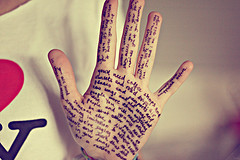 So. What did I do today?

Okay. So far today; I went up top the bank to collect some rent money; picked up two kinds of olives because the third kind was wrong; made lunch; and realized I hadn't had breakfast, because I was plotting out this story idea I had when I woke up.

On the walk to the store, I considered the sun and all it's nasty properties, given it's a pretty hot day. For a while, I wondered about the mathematics of how less than a thousandth of a percent of the sun's energy reached earth, but that was enough to power all the weather; including the hurricanes; plus fry a few people with sunstroke; plus make every single living thing grow.

This led to an idea which would allow for all the sun's power to be harvested; but that went belly up when I realized the story in my head was a lot like a Star Trek episode I had seen; so obviously I couldn't get to work on that one.

I listened to two podcasts on the way there and back; one with a sassy 1930's girl detective solving a murder; and an dramatized version of the Foundation Series by Asimov, where a group of thinkers use knickknacks and tinker toys to conquer the universe.

Finally got a contents page to work in my book; and finished writing a bridge between the first and second halves of my second novel-in-progress.

I rewatched a few episodes of +H+ The Digital Series, seeking some proof in a theory I have about the twisty-turny plot lines of this particular web-series. I discovered my theory was wrong, but I got inspired by the what-ifs, so I did a little research on the transhuman movement; and I see several potential storylines... but I'm looking for one that hasn't been done already and a quick search on Amazon says the first things that come to mind have been done almost to death.

There was a kid in the produce section looking over a grapefruit with disturbing intensity; and a woman who bought a chocolate bar, paying for it in very small change; stacked twelve coins deep. So now my next story idea has two interesting characters.

What did I do today?

Half the world is made up of people sitting in the corner, scribbling into a notebook; or a kid playing let's-pretend, or a gamer on a laptop; taking on armies in four different directions as only a brilliant tactical mind can. These things happen every second; and are ignored or unobserved.

Seriously; look around. If you're reading this on a laptop; or a tablet or a smartphone; I bet you're in a public place. How many people are gazing into the distance with a thousand-yard stare? The creative people are all around you.

Who would think to look at us that we have universes unfolding in our heads?


photo credit: Βethan via photopin cc
Posted by stephensmat at 21:29